The actor in front of the camera 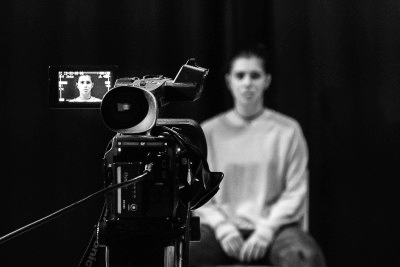 Want to learn what tools to interpret in front of the camera? How to work with gaze, listening and presence? And most importantly, what’s the difference between acting for an audience and seeing yourself on the big screen?

Get to know the tools to play in front of the camera. In this course you will learn to master the creation of characters, conflicts, situations and different scenic realities. Scene practices and camera text work will be done.

There will be practices of scenes and text work with camera, individually and in groups, with the option of also generating useful material for your videobook.

From October to June, 2 times to choose:

Price of the course: € 390 every quarter, more information and inscriptions at eolia@eolia.cat

Introduction to the cinematographic language

What were the origins of cinema?

How did cinematic language come about and why?

How has it evolved to the present day?

What differences has it made in the way you narrate visually? And when it comes to acting?

What should an actor / actress consider during a shoot?

What is the relationship between your work and the rest of the film crew?

In this course we will learn to use audiovisual language as a vital tool to be more efficient in communicating emotions on the screen. We will learn how great directors use it by watching excerpts from films and analyzing them.

And finally we will put into practice the knowledge learned from recording exercises.

This playwright and theater director combines his work with teaching at the Aeolian School.
As a playwright, his most outstanding works are “SOMETHING” premiered in 2.005 at the Versus Theater in Barcelona and at the Teatro Tarambana in Madrid, nominated for the Teatre Barcelona Awards and re-released at the Sala Villarroel in Barcelona eight years later, “IN ANYONE OTHER PART ”SGAE National Theater Award 2.006 and premiered at the Greek Festival 2.007 and at the Casa del Teatro in Bogotá,“ ÍNCUBO ”premiered at the Sala Villarroel in 2.011 and“ BÉLA BARTÓK, EXILI A NOVA YORK ”premiered in 2.013 at the Greek Festival of Barcelona at the Espai LLiure.
As a director, he has directed “NORWAY.TODAY” by Igor Bauersima premiered at the Goethe Institute and the Teatro del Arte in Madrid and “LES MANS BRUTES” by Jean Paul Sartre, in a dramatized reading at the Teatre Romea in Barcelona. Both plays were performed in 2.013.

As an author and director of musicals, we highlight his participation as co-author of the libretto and songs of "WHAT, a new musical" premiered at the Coliseum in Barcelona in 2.007 and winner of the Butaca Award for best musical composition. And the collaboration with The Mamzelles, founding The Mamzelles Teatre and participating in its first three productions: The Experiment, 2.012 (Espai Lliure), My Sweet Country, 2.013 (Teatre Poliorama), Orgia, 2.013 (Espai Lliure).

In the audiovisual field, as a screenwriter, together with Aina Clotet he is the author of "POSITIVE", directed by Judith Colell and together with its author is responsible for the television adaptation of the play GERMANES ”By Carol López, both tvmovies nominated for the Gaudí Awards.
Apart from being a teacher of acting and film scriptwriting, he has been applying techniques and practices related to dramatic art for eight years to improve the execution of oral presentations within different professional groups.

The fact that he has a degree in Law opened the door for him to be a professor of communication at the Barcelona Bar Association for four years. He has also taught at the College of Architects of Catalonia, at Pompeu Fabra University, Faculty of Health Sciences and of Advertising and Public Relations.

For seven years he has been working for the Doctor Antonio Esteve Foundation with professionals linked to medicine throughout the state. 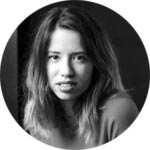 Actress of cinema and theater, formed in the Study of Nancy Tuñón and Jordi Oliver in Barcelona and in the National Dramatic Institute (NIDA) in Sydney. Complete his training with several courses and techniques such as Leqoc or Meisner. Graduated, also, in Audiovisual Communication, is the other founder of the artistic company Incautas Project, hosted by the Ivanow Ship.

In the 2017 premiere of the work "Odisseus" directed by Quimet Pla in Sala Beckett and becomes part of his theater company "Teatro Todo Terreno". He has collaborated in the feature films "El patio y la luna" by Santiago Lapeira, and "Solo Seqüencias" and "Blood Room" by Chico Morera. At the end of 2017 he participates as assistant director of the play "Morfenautas", directed by Jana Errando and premiered at Teatreneu.

Starting with 2018, he began to collaborate on television with Movistar + and Tv3. In December 2018 was hired by La Fura dels Baus for the show "Information vs. Memory", opening the same year. The release of "Amor lejos" and "No más limones" directed by Alejo Levis and produced by Incautas Project is under way during the 2020. In 2019 he entered as Head of Production of "HADA" opera prima by Alex Mañas that produces Eolia, the first feature film of the School.

A graduate of the Institut del Teatre de Barcelona in Dramatic Art and a Master's in Film and Television Direction from Ramon Llull, Toni Vives has been combining his acting profession with stage and audiovisual direction for many years. writing and pedagogy.

As an actor, he has worked in plays such as King Shakespeare's King John, directed by Calixtus Benedict (Greek 1995), and Chekhov's Ivanov directed by Genadi Korotkov (Flower Market), The Three Musketeers, directed by Pep Anton Gómez (Teatre Romea), The Complete Works of W. Shakespeare Abbreviated directed by Adam Long (Teatreneu), Beauty and the Beast directed by Hadi Kurich (T. Regina) or Eleven, Nine, Fourteen directed by Pere Planella (Grec 2014) ), others. On television we have seen him with series such as La Riera, El Cor de la Ciutat, Ambiciones, Labyrinth of Shadows, Estació d'enllaç and Sitges.

He began in the direction of assisting: Under the Dairy Forest and The Rise (Jesus Ten) and Refugees (David Plana). As director he has directed: Fatma by M'hamed Benguetaff (Festival Entrecultures); The Comedy of Errors, by W. Shakespeare; (Shakespeare Fest.); Lulu (first night), Cia. Roberto Alonso; Mínimal Show, by Miquel Górriz and S. Belbel; Kisses by Carles Alberola and Roberto García, Els enamorats, and, One of the last carnival evenings, both by Carlo Goldoni; The Morality of Mrs. Dulska, by Gabriela Zapolska; Blood Weddings, and Yerma, by F. García Lorca; The Dangerous Friendships, by C. Hampton; Vapors, by Nell Dunn; The Inquiry, by Peter Weiss, among other shows.
After writing and directing various short films, he worked as a casting director, actor director and director of 2nd unit, in the online series Crisis: protocolo BCN K36 produced by Beloze Producciones.

As a writer, he has written, among others, a musical adaptation of The Comedy of Errors (Shakespeare Festival); the play La barraca de Sant Antoni (subsidized by the territorial services of the Generalitat de Catalunya) and the scripts Best Life and Des-ayunos, among others.

From 1994 to the present, he has worked non-stop as an acting teacher in various schools. He currently teaches acting classes at the Coco Comín School of Musical Comedy; of interpretation by camera in Aeolian Esad; and Audiovisual Culture in Granés Baccalaureate.

Download the registration form and send it completed to eolia@eolia.cat.

Would you like to receive information on proposals related to cinema and TV organized throughout the course? Leave us your email!