Once again, students who are in their final year from his education to Eolia they invite us to enjoy the final assembly that they have prepared during the subject of Professional Practice.

This year, they have had the collaboration of Marc Martinez as a director and of Sergi Pompermayer as the author of the text. And the result of this joint work is THE SILVER, a cabaret spectacle that will take us to Barcelona in the early 20th century. 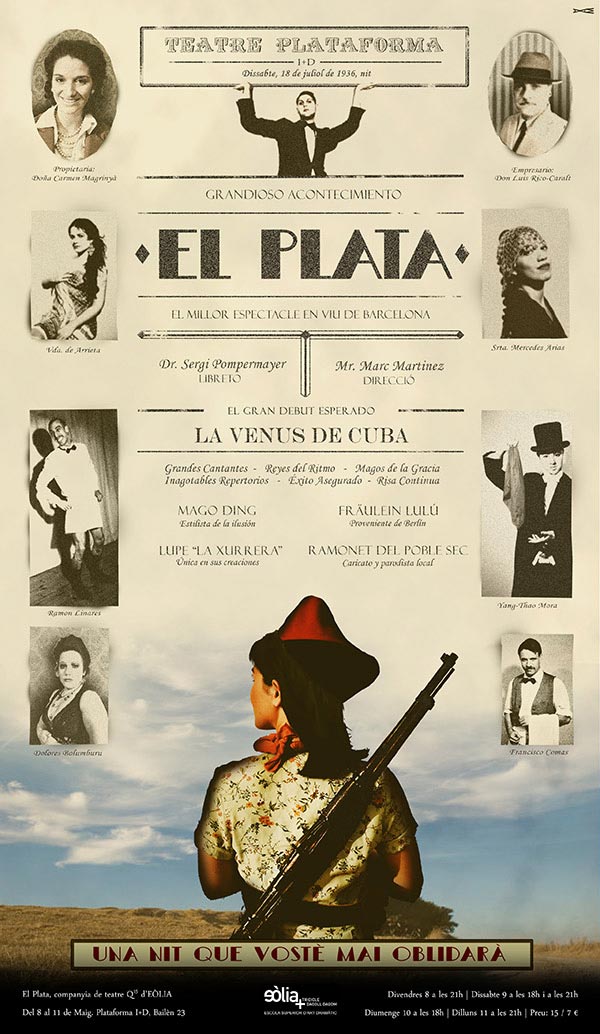 To book the tickets you can send an email to entrades.plataforma@gmail.com

"It must be the work of the youth
break the chains of slavery.
It goes to another better life
where humans enjoy love.
You need women to collaborate,
in the beautiful work of humanity;
women, women, we need your union
the day that our great revolution begins.
Sisters that you love with faith the freedom
you have to create the new society…
The sun of glory that has to cover us
to all in sweet living. ”

Everything I have wanted to count on SILVER, in some way, is in this song. In the words of his lyrics and in the feelings that his music brings, simple and popular. We sang the militants in Terra i Llibertat, a movie by Ken Loach in which I was lucky to participate now 22 years ago (a British filmmaker had to come to explain the Spanish Civil War; he must have something in See the fact that the best historians of our history are English, well).

In the fieldwork I did to prepare the film — the most beastly professional experience I’ve ever had — I heard the old CNT and POUM ex-combatants openly reasoning about a concept I didn’t know: the Revolution Social of the 36! In my house, as in most Catalan homes, there was not much talk about the war, much less about this supposed "revolution". All in all, on a Sunday table, and with a small mouth, "red and national" and stop counting.
It was then, during filming, in the High Master, when I saw that this was not about any Civil War, but about this unique and original attempt to want, for the first time in our history, to change everything.

EL PLATA wants to be a tribute to those people of Barcelona who one day took to the streets, armed, to fight the fascists in the name of freedom, and who after heroically stopping the revolted army, launched a unique process in the history of our country because, in addition to being brave, they believed that another world is possible.

Finally, I just want to tell you that if the Revolution ever goes ahead, I think women will do it sooner. And we, comrades, comrades, will remain in the rear, waiting for Godot, making strength !, while in the trenches the battle of love is fought, surely, in peace and harmony.

WOMEN To my mother To my daughter

PD: Company, there is still a long way left.

Eolia2020-05-05T18:27:49+02:00
Page loading link
We use our own and third-party cookies to improve the user experience through their browsing. To change your settings and see full details of our privacy policy, please see below. Configuration Ok