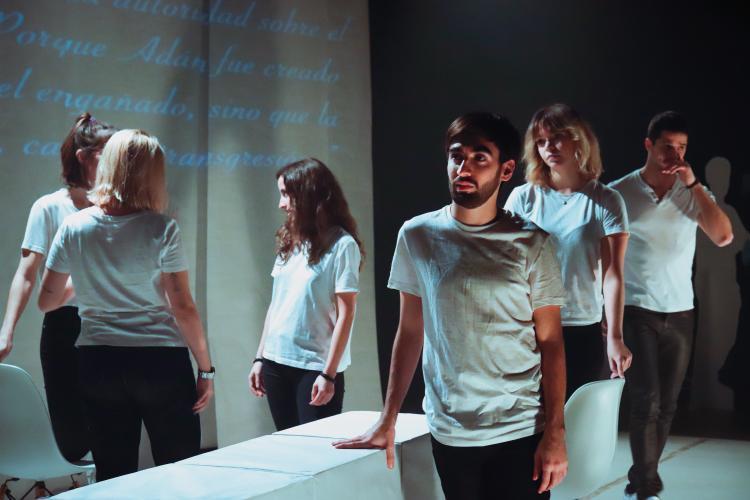 THEATER THEATER - The paradise of the story

Life is fiction based on real events

From individual fiction to collective fiction. From the stories created by the powerful to control the weakest to the self-deception we create to survive.
The philosopher Slavoj Žižek says that we need fiction to face life, to digest it. We need to live in a story, because the real reality is traumatic, excessive, unbearable. To protect ourselves from it, we live in a world that, so hyperrealistic, is deeply unreal, and we begin to perceive real reality as a virtual entity, an illusion, a nightmare.

A scenic journey that does not want to be an escape from the Platonic cave, but a conscious descent into its darkest caves.

Why do we need to lie and lie to ourselves? Do we yearn or fear reality? To what extent are we willing to let ourselves be deceived?

With this work, we want to make the public reflect on the boundaries between fiction and reality, between truth and falsehood, and even make them question whether these boundaries exist or not. We do this by combining comic and dramatic scenes, realistic and grotesque, transferring all the conceptual research behind the project to a tangible code, entertaining for the viewer, but at the same time awakening his critical spirit. According to the theme of the play, most of the scenes are based on or inspired by real events (the performers' own experiences, recreation of historical events, etc.). We start from the first big lie we uncovered in childhood, the story of the Kings of the East (or Uncle, or Santa Claus). We also navigate from the political stories generated from the 11/XNUMX catastrophe in New York, to the perverse falsity of reality shows; from the patriarchal dogma driven by the great religions, to the thousand false beliefs and urban legends that we have been believing generation after generation. All in all, always with a marked theatrical code that seeks to laugh at what is serious, even what is traumatic, and play with the audience; see how tight the ropes that separate reality and fiction can be.

A co-production of Aeolian R&D and Misery and Company.
A show that has emerged from the Aeolian i + D Creation Spaces